presented by Mike Shepherd in Cahoots with the Minack Theatre

'theatre that sharpens the senses...a bounteous night that deserves a longer life' The Guardian

Join the marvellous Mr Calvino and his motley troupe of tale-tellers, song-makers and fire-raisers for an unforgettable ride through life told, quite literally, on a cliff-edge precipice! Be entertained by hapless thieves, very clever peas, daft billionaires and women who live entirely on wind!

Loosely inspired by the folktales of Italo Calvino, Calvino Nights is a show for those who’ve lost their moral compass (it’s where you left it!) or for those who simply need a damned good night out!

Mike Shepherd writes: 'Italo Calvino is an Italian writer who collected aural tellings of folk tales and rewrote them with a lavish sprinkling of exaggeration.  Calvino Nights is inspired by a mix of several of these folk tales including the adventures of a boy the size of a pea, a skinflint miser, a woman who lives on nothing more than wind, there are hapless robbers, fallen angels, circus tricks, the cosmos and lots of fire !

Calvino has inspired us for many years. Kneehigh shows The Wild Bride and The Wooden Frock were based on his folk tales. Last April we made a short film at Restormel Castle with director Joe Wright inspired by the Calvino story Princess and Peppernose - you can see it below!  Now is the time though to leave those screens behind ! Stories need to be experienced live, we all need live events!'

Fiery bursts of pent-up creativity engulf the stage at the Minack in a scorching, wild and wonderful cacophony of colourful sound and vision that makes the heart sing along with a sense of uninhibited freedom to perform again for a live audience.

After two dismal years of virus-inhibiting theatrical vision, legendary Kneehigh founder and director Mike Shepherd and his talented team explode on to the stage with a show that widens our eyes to flaming flamboyance and fills our ears with an enticing rhythm.

Ten actors and musicians are chasing their moral compass, but it seems to have gone up in smoke, lost amid the gassy, gasping puffs of flame that encircled the stage for the first-ever performance of Calvino Nights on a tour that can be seen at the Minack until May 19, when it transfers to the Lost Gardens of Heligan for the rest of the month.

The show has been devised to excite the whole family, with an abstract storyline based on folk stories told by Italo Calvino and rooted by a tree of tangled twigs and branches, hung with flame-throwing musical instruments   -  a tree of life, a ladder tree, a tree of note?

The actors engage with the audience from the moment they arrive, serenading groups with an intriguing tuba and accordion duet, playing card tricks among pasty picnics, pointing and gesturing, and catching the wind in a raggle-taggle of costume and design by Lucy Seaber, Paka Johnson, and Ruth Shepherd, with music composed by Alex Lupo, Justin Lee Radford, Tim Dalling and Dom Coyote.

The action is devised and directed by Mike Shepherd, who also appears as Mr Calvino, and super-experienced director Elayce Ismail, for imPOSSIBLE Producing, in response to an invitation by Minack executive director Zoe Curnow, to create a show that was like those she remembered "as a kid watching Kneehigh" many years ago.

It came at the right time. Cornish audiences were saddened when the award-winning Kneehigh folded during the pandemic, after 40 years of presenting brilliant and inventive productions.

They set the world on fire with flying puppets and banners and launch a missile towards the moon  -  all in a day's work for this imaginative team.

Bea Holland appears as the cockney opportunist, Mama Cook, whose ruthless survival skills would match those of a Dragon's Den contender. She is in good company with Tight Tycoon, Tim Dalling, who is searching for "inter-gallactic tax havens".

It's all so stimulating and fun  -  spring is in the air.

Irresistible theatre that sharpens the senses

Once upon a time? What a tedious way to begin a story say the cast of this irresistible new show by Kneehigh founder Mike Shepherd, his first since the mighty Cornish theatre company disbanded last summer. Before it even kicks off, Calvino Nights has pyrotechnics and flag waving, music and dancing, with actors prowling through the crowd trying to swindle us. They are latterday versions of Crack, Crook and Hook, the crafty trio whose deceptions are recounted in the Italo Calvino collection of Italian folk tales that inspired the evening. “We’re robbers, we’re rogues, we’re thieves,” they chant roisterously. To make it clear: “We nick stuff!”

In Shepherd’s show – co-directed with Elayce Ismail and co-written with Carl Grose, Anna Maria Murphy and Tim Dalling – it is as if the stories slowly bloom up among the cast, much like the set seems to have grown from the ground. Ladders are entwined with branches in a pyre designed by Luke Wood and decorated with weathered instruments and sculptures of animal heads. Inside it, a live band make merry. Any show staged at the open air, clifftop Minack has instant atmosphere – the backdrop is the Atlantic Ocean – but Calvino Nights fully utilises the setting. It’s theatre that sharpens the senses.

You might expect one of the sea stories collected by Calvino to be prominent in the patchwork of the script but other elements dominate. The show’s fire master, Paka, wields burning instruments, orchestrates bursts of flames as a musical accompaniment and at one point sets the stage alight, underscoring Caitlin Kaur’s darkly wistful singing.

Kaur plays The Wife Who Lived on Wind, whose habit of eating air appeals to a skinflint tycoon (Dalling in fine comic form). Calvino’s miser was a prince in Messina; here he becomes a preening gazillionaire with an Elon Musk-esque obsession with Mars. The story is combined with that of the mean soup-seller Mama Cook (the brilliant Bea Holland) who has a chickpea-sized son, leading to a rather protracted escapade about a rocket heist, but neatly making the point that miserliness and exploitation are not the preserve of the megarich.

The show, like the folk tales collected by Calvino, also springs from a very real awareness of poverty. Mama Cook’s refusal to provide succour to a band of travellers gains pertinence from the way they emerge as if migrants from the ocean. Among the cast is Girum Bekele, a talented Ethiopian puppeteer and circus performer who joined the Good Chance ensemble and appeared in The Jungle, about the Calais refugee camp.

This compassionate show wears its heart on its sleeve (and on Shepherd’s own chest: he sports a “make love not war” T-shirt). It also has a sharp sense of political outrage. The characters are on a search for their moral compasses – and they’re not alone, Shepherd observes.

The morals of these stories could afford to be more understated but the stagecraft is often arresting. String and rod puppetry enriches the characters of Pete, Mama Cook and Calvino himself (also portrayed by Shepherd) and a huge puppet emerges at the climax, with wings made from twisted roots, her reproachful stare softening with a slight turn of the head. Lucy Seaber and Ruth Shepherd’s costumes include mix ’n’ match tracksuit tops and black kilts, which let the performers’ scratches and tattoos become part of the show’s aesthetic. The band, led by musical director Alex Lupo, strike up with the force of a crashing wave, and everyone on stage – including puppeteer Sarah Wright – is juggling a number of roles, if not flaming skittles as well.

Presented by the Minack and imPossible Producing, it is a bounteous night that deserves a longer life. Calvino would surely have approved: his collection was inspired by the Tuscan proverb “The tale is not beautiful if nothing is added to it.” This is nothing if not beautiful.

Calvino Nights is at the Minack theatre until 19 May. Then at the Lost Gardens of Heligan, from 27-29 May. 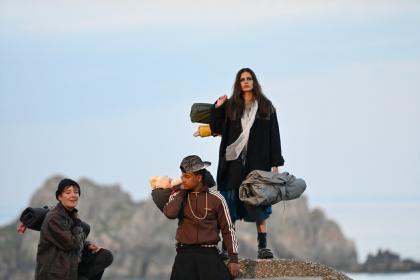 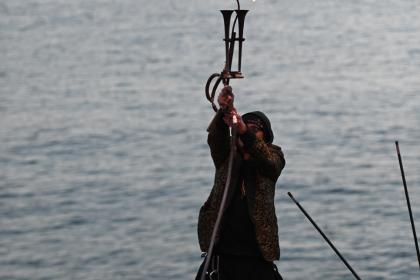 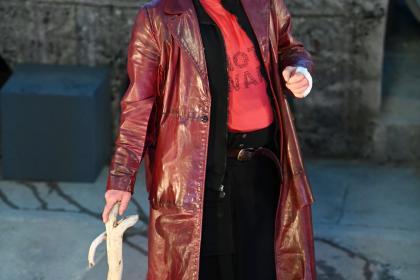 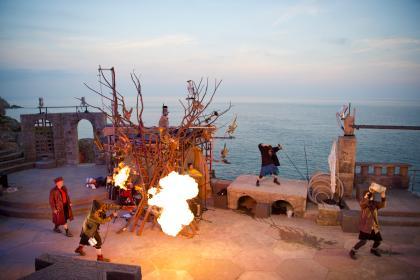 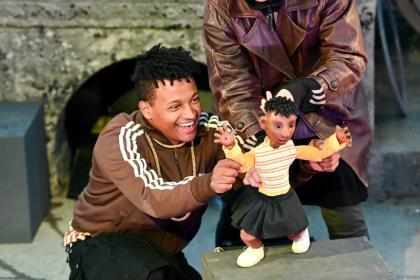 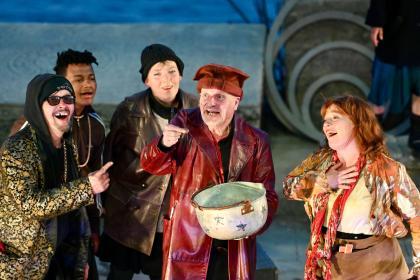 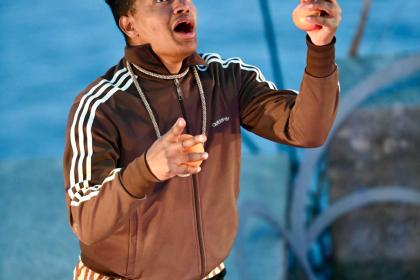 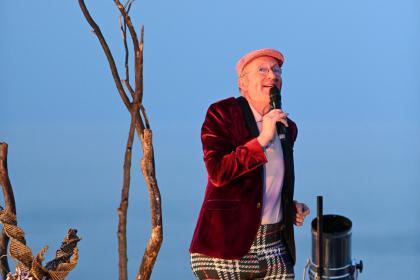 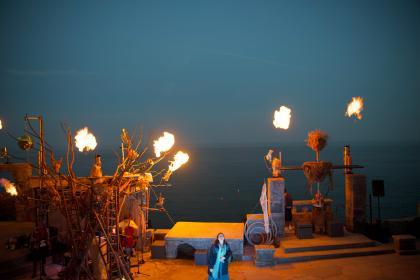 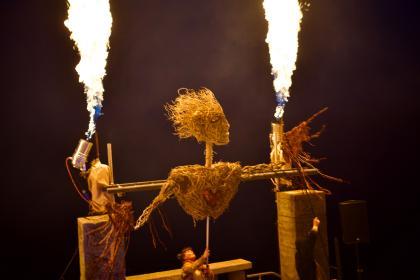 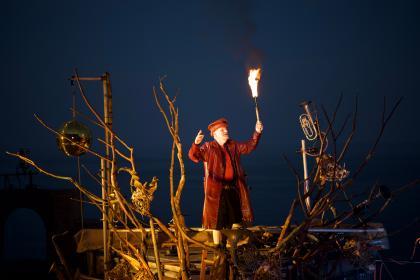