Elizabeth I: Virgin on the Ridiculous

Elizabeth I: Virgin on the Ridiculous

1558. England. A country divided by religion and politics, teetering on the brink of civil war. The hopes of the nation lie with one woman.

2022. England. A country divided by those who enjoy plays featuring men in dresses and those who don’t. The hopes of the nation lie with two West-Country actors.

Yes, that’s right. After touring their sold-out-from-Penzance-to-Pitlochry, Off-West-End-Award-nominated The Six Wives of Henry VIII, the second of Living Spit’s (un)Holy Trinity of hilarious heritage historiographies is go as Howard and Stu attempt to tell the story of the greatest monarch that ever lived - Elizabeth: The Virgin Queen.

“The Morecambe and Wise of Weston-Super-Mare” The Telegraph

“A case study of sinewy simplicity and honed comedy craftsmanship.” The Stage ****

"90 minutes of great entertainment, for not all the family." British Theatre Guide

Elizabeth I—Virgin on the Ridiculous

Howard Coggins and Stu Mclouglin’s breathless romp through the reign of Elizabeth I opens with a hormonal Bloody Mary reflecting upon mass murder, cocktails, a phantom pregnancy and the perennial problem of her slim-hipped half-sister locked in the tower.

An untimely natural death and Lizzie hits the throne with lifelong best buddy Bobby (Sir Robert Dudley), Master of the Little Pony, at her side and suitors aplenty leaving ansaphone messages galore.

Destined to rule, Mcloughlin’s tattooed Lizzie may be flat-chested but she has the heart and stomach of a King, and a string of pearls (and had a bit part being shot in the face by Eddie Redmayne—and incorrect credits—in Elizabeth: the Golden Age). A swift induction by William Cecil, 1st Baron Burghley, in HR and she is on the throne, crown akimbo with 116 offers of marriage and a dismal future vision of popping sprogs and flirting with widowed brother-in-law Philip to avoid invasion.

There are many unavailable gift-bearing heartthrobs (all played by versatile Coggins); derring-do; the boats, guns and palaver of the Spanish Armada; and a resolute Virgin Queen, powdered and wigged, never kissed or fondled, facing down cunning collusion and innuendo-ridden conspiracy from cousin Mary Queen of Scots thanks to bongo-playing Spymaster extraordinaire purveyor of confectionary Francis Walsingham cracking the Chumbawamba / Babington code.

The humour is madcap, honest and smutty; devices clever (the Dear sparkly Diary segments a brilliant mechanism for relaying inner thoughts) and the music genius. Coggins has a tremendous voice—whether as a rapping Sir Walter Raleigh, a heavy metal James I or ballady Bobby—and playing live is always a hit.

Touring the West Country until July, Living Spit’s latest hysterical heritage historiography is an engaging 90 minutes of great entertainment for not all the family.

According to the historiography of England, as written by two irreverant west country comedians, Bloody Mary was succeeded to the throne by the Ginger Bastard  - there are other ways of putting it, but this version was very funny.

Elizabeth I: Virgin on the Ridiculous was presented at the Minack by Howard Coggins, whose many roles included Sir Walter Raleigh, one cool rapper, bringing home a hot potato from the New World, to Lizzie, otherwise known as Stu McLoughlin, who invariably wears a shift dress and pearls, whatever the role.

The pair are otherwise known as Living Spit and come from north Somerset when they are not on the road, via London and the Bristol Old Vic, with this show a follow-up to last year's spoof on the six wives of Henry VIII.

They write their own fast-paced scripts that seek out the inappropriate, tell-it-as-it-might-well-have-been facts based on their own historical take, with loads of their and other peoples songs and references, this time with the accent on the thumping punk rockers, Chumbawamba.

As they see it, Elizabeth I had quite a crush on Sir Robert Dudley, Master of the Little Pony, fondly known as Bobby, who won her favour, ahead of queues of would-be suitors, trying to contact her via Ansaphone on a Thursday in 1560.

She writes in her Dear Diary, that in the words of Mick Jagger "you don't always get what you want" even if you are a tatooed Tudor queen.

Sir Frances Walsingham, spymaster, almost wows her as  the Milk Tray Mystery Man. "Oh chocolates" she exclaims, before the box is whipped away, and she resolves to remain a virgin, "a royal hermaphrodite" with the body of a woman and the heart of a king, or something.

She has nothing to do with another suitor, "Eric the bloody Swede" and would especially not entertain a Frenchman, until the charming Hercule Francois, the Duke of Anjou, 22, to her 46 years, almost sweeps her off her feet.

But all-too-soon, William Shakespeare arrives with her death speech in hand, and that is the end of the show. It was all very entertaining. 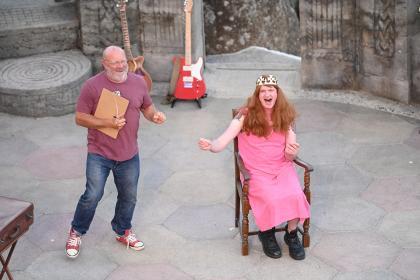 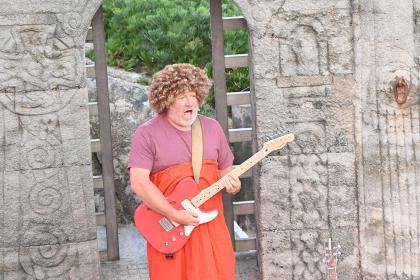 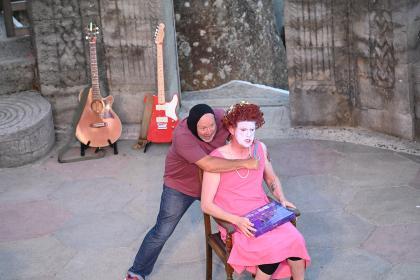 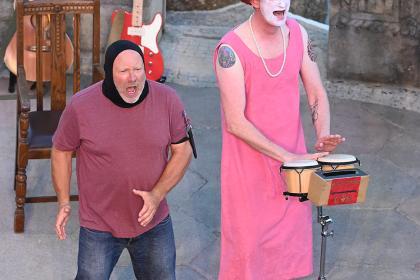 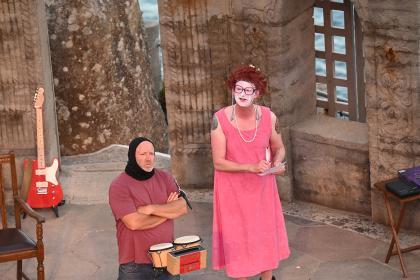 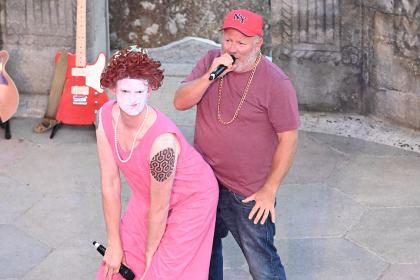 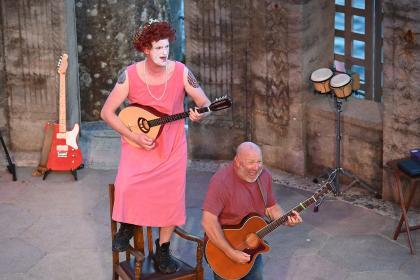 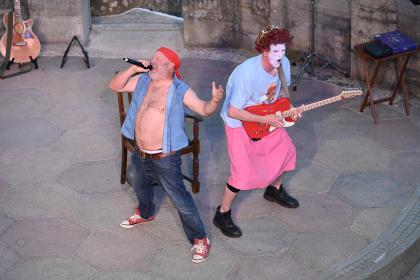