‘What is love?’ Shakespeare’s comedy features the excitement and danger of falling in love.  The hierarchy of status does not mean that love can be taken for granted. The path of true love is most definitely not smooth.

Twelfth Night also confronts a darker side of loss, Olivia has recently lost a father and a brother, while Viola believes her twin brother to be drowned. Both re-examine their role in an essentially male-dominated world.

Gender is fluid and cannot be assumed from appearance alone, Viola/Cesario is, ‘all the daughters of my father’s house and all the brothers too’.

Alongside the serious business of love there is an infectious element of fun and life seen as a never-ending party where pranks and jokes can sometimes spiral out of control. You can’t have a party without music and music is at the heart of this production. Expect a lot of fun, a few surprises and some twists as ‘present mirth hath present laughter.’

Carnon Downs Drama Group were last at the Minack in 2018 with Henry IV Part I and were invited back for 2020 and 2021 (whatever happened to those years!) After two years of cancellation they can’t wait to back at the Minack.

Carnon Downs are an RSC Open Space company who were selected to perform the parts of the mechanicals and Bottom in the RSC 2016 touring production of Midsummer Night’s Dream. Some of the cast of ‘Twelfth Night’ were in that production, whilst others are taking part in the RSC ‘Henry VI Rebellion’ for five performances in Stratford in April 2022.

As well some will also be part of the RSC Shakespeare Nation in association with the Hall for Cornwall and performing their Comedy of Errors at HfC 10th April 2022.

Shakespeare's duchy of Illyria could be anywhere, but this time the setting for Twelfth Night is right here in Cornwall, with a beach party and picnic in full swing, and sufficient wine sloshing around to sink a ship.

Now I come to mention it, there is a wreck as well as a lifeboat rescue on stage within minutes of the start of this play, as a hearty chorus of the song Camborne Hill sets the local scene.

Lockdown for a pandemic has certainly fired the imagination of director John Frankland and the Carnon Downs Drama Group, who have taken the Bard at his word, and seized on the What You Will interpretation of this comedy, with a wave of gender-switching thrown into the Celtic wash.

The result is a boisterous mix, played at a lively pace by many of the actors that have undoubtedly found huge confidence under the wing of the Royal Shakespeare Company, no less, whose community and Open Space projects have given them the opportunity to join their touring and recent Hall for Cornwall productions.

Thus, there are one or two updates to the original, with the kilted Feste, (Adam Bowkett)  the fool who is wise beyond his words, selling the Big Issue as the audience gathers, and there is a pizza arriving via Deliveroo for Sir Toby Belch (Guy Hanson). Meanwhile, Sir Andrew (Louise Fulwill) becomes Lady Andrea Aguecheek (well done keeping that descriptive medieval surname, though).

Sebastian, twin to Viola, (Anna Ray) becomes Sebastienne (Lily Burton) and Antonio becomes sea captain Antonia (Hayley Hume)  - all clear? The point is that this is a playful piece of entertainment by Shakespeare the incomparable wordsmith who deliberately plotted identity changes and deceptions designed to make a fool of Malvolio (the part shared by Nick and Zoe Vale).

Nothing is likely to throw the surfer-styled Duke of Orsino (Will Husbands) or Countess Olivia (roles shared by Charlie Springthorpe and Lucy Dowling), the scheming Maria (Gemma Wright) or her sidekick (Kate Barden), as Malvolio prances around in skin-tight canary coloured leggings and floppy bows, even as Viola, otherwise known as Cesario tells us "I am not what I play" in a gender-fluid situation.

The costume concepts are by Nick Vale with John Frankland, wardrobe by Veronica Spear, sound and lighting Sam Beckett.

The whole thing is once again, as it so often is at the Minack, backed by a fun soundtrack composed and performed live by Ben Sutcliffe and Zaid Al-Rikabi, who play on with musicians Caroline Bennett, Helen Gibson, Karen Pirie and Jo Tagney. 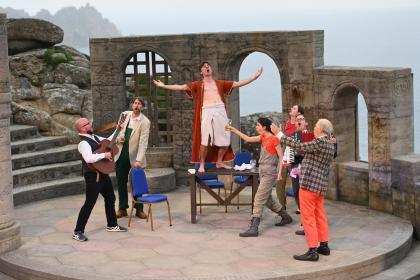 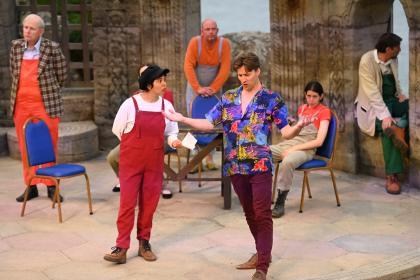 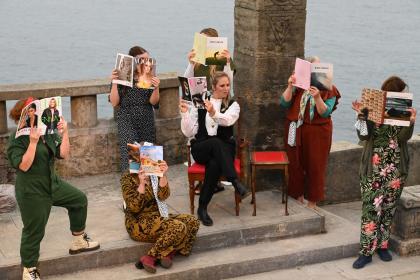 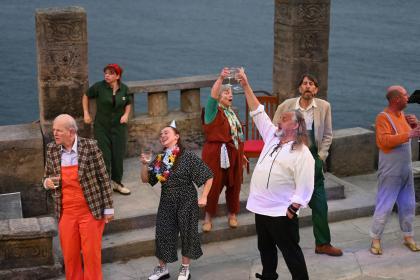 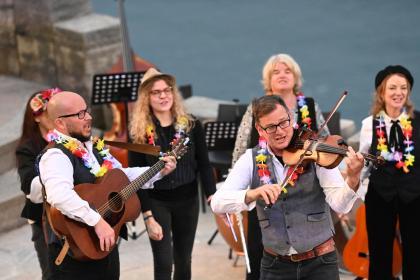 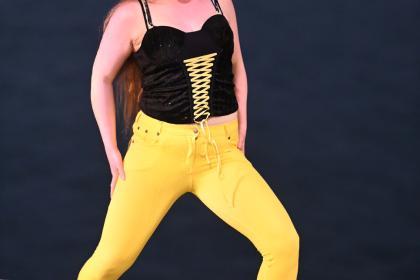 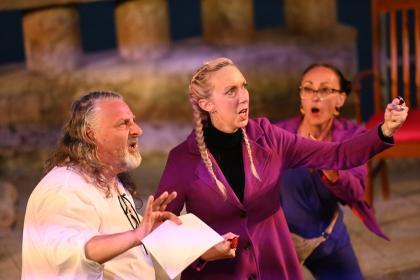 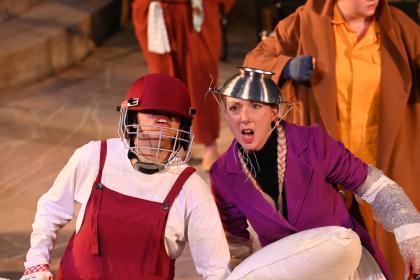 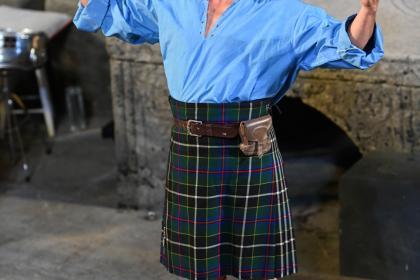 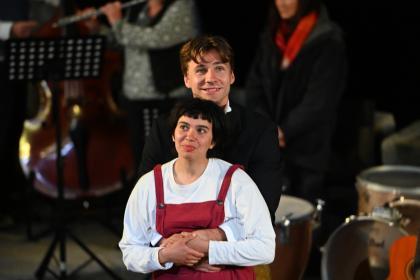 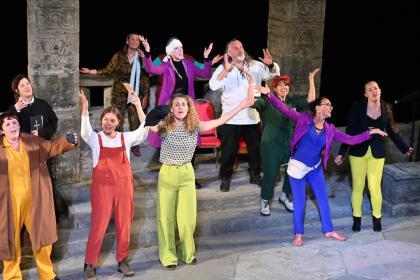