The Pirates of Penzance

The Pirates of Penzance

Frederick, apprenticed to the Pirates since a child, learns that he was born in a leap year on 29th February, and that he is contracted to the Pirate King not until his 21st year but his 21st BIRTHDAY.  With only the inept Penzance constabulary to protect him, will he be forced into a life of piracy until he is 84?  And will his sweetheart, Mabel, wait for him that long?

Performed by a 6-strong cast of actor/singers with specially-orchestrated jauntily-nautical accompaniment, The Pirates of Penzance gets the complete Illyria treatment. Despite the reduction in scale not a single word from WS Gilbert's libretto is cut, nor a single note or harmony from Sir Arthur Sullivan's score unsung.

With tongue-in-cheek melodrama, sharp satire and glittering wit, The Pirates of Penzance is as fresh as if it had been written today. It is packed-full of memorable songs such as "To be a Pirate King!"; "Modern Major General" and "A Policeman's Lot is Not a Happy One”.

For 30 years Illyria has dominated the open-air touring theatre sector. Illyria burst onto the scene in 1992 when not only was there scarcely a scene to burst onto, but what scene there was entirely consisted of Shakespeare.

With a history of “firsts” behind us, Illyria has chosen to celebrate our 30th birthday by returning to 3 of our most successful ones. Our Shakespeare production will be the same as the one that kicked the whole thing off back in 1992: A MIDSUMMER NIGHT’S DREAM. For our family show we will return to the first ever children’s show we toured: PETER PAN. For our Gilbert & Sullivan we are revisiting the perennially popular THE PIRATES OF PENZANCE.

Let's think of Six of the Best in terms of the entire cast and chorus of The Pirates of Penzance being acted by just six  - what, not just six, yes, yes, just six.

A full scale production usually features a big chorus of fair maidens climbing over rocky mountain, plus a gang of pirates and team of plods, and the leading actors, of course, but the touring Illyria company puts on a great show with just six performers.

Five of the actors are making their debut with the award winning theatre company, which has just celebrated its 30th birthday, and the sixth, Ed Simpson, is a veteran of 11 seasons with the group that rehearses just across the peninsular from the Minack, at nearby Sennen.

The remarkable director, founder and writer, Oliver Gray, has three anniversary productions on the go, with J.M. Barrie's Peter Pan, and A Midsummer Night's Dream completing the trio that will tour the whole of the UK this summer.

So, it's not a bad idea to keep everything simple for long road trips, with sparse but stylish scenery. Who needs more than a mast and sails, with skull and crossbones, oh, and oars and a dinghy, and just a very small number of actors.

But there it ends. Nothing else is reduced for this funny, high energy show about an orphan called Frederick, who was supposed to be apprenticed to a pilot, but has somehow become a trainee pirate....

Gilbert and Sullivan's comic opera won fans from the very first performance in 1879, and is a favourite, with songs you are still humming days afterwards.

Illyria's actors create a lot of noise and endless fun, especially when Frederick (Philip Broomhead) dumps his protector, Ruth (Sarah Pugh) overboard from the dinghy, after a tussle with the oars. The resulting huge watersplash throws up a fish, apparently from the Atlantic backdrop, but she reappears with a life ring around her waist, desperately 'swimming' to keep up with the boat.

A stunningly quick change of costume, one of many, reveals six fair maidens, one with a moustache, who burst onto the stage with shrill shrieks, flouncy and frilly in petticoats and flowery frocks, singing Climbing Over Rocky Mountain.

Pirate King, MacKenzie Mellen, is glorious alongside soaring soprano Rosie Zeidler as Mabel, and Amy Lockwood is in her element as the Sergeant of Police, with the plods in Ikea coloured, Andy Pandy style uniforms, frightening themselves by twirling their batons.

And once again, Ed Simpson is as pure gold as his over-sized epaulettes, and ostentatious red, white and blue feathered helmet, as the monocle wearing modern Major-General -  later resplendent in glittering tiara as Queen Victoria, no less.

The musical director and orchestrator is Richard Healey, and choreographer of the keenest moves, Kim Healey, with Pat Farmer in charge of the costumes, and scenery by Jill Wilson with Alan Munden.

Yes, yes, six of the best and all the rest. 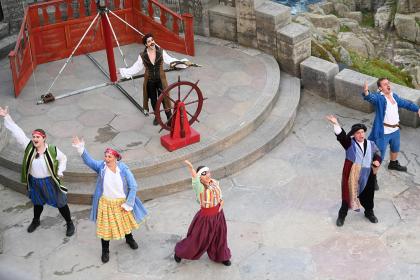 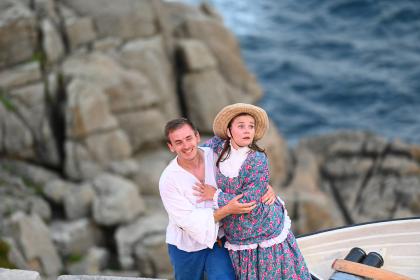 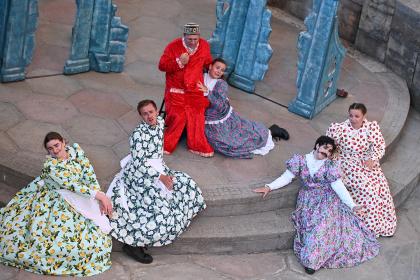 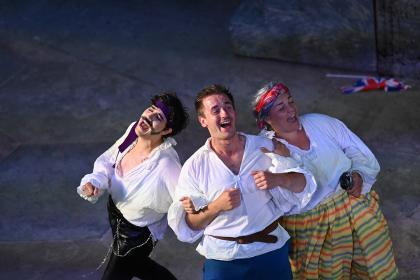 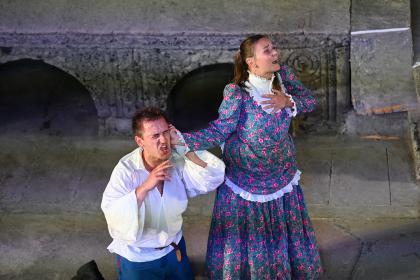 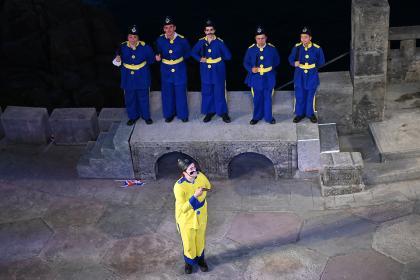 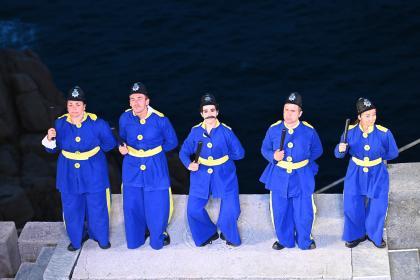