by Kate Hamill, based on the novel by William Makepeace Thackeray
Newport Playgoers Society 3 Jul 2022 - 7 Jul 2022

"A tale of love, loss and lust, ... nothing short of a triumph, resplendent in colour and vividly exciting performances" (EntsSouthWest)

Meet Becky Sharp, a young woman born with every disadvantage and a firm determination to take Georgian society by storm - whatever the cost. As Becky climbs the greasy pole, pretty, rich Amelia Sedley is sliding inexorably towards ruin. The women’s paths cross and recross, but can they save themselves from disaster or will they be each other’s destruction? Kate Hamill’s exuberant version of this classic tale is as witty and unorthodox as its irrepressible heroine.

Was Girl Power really on the mind of William Thackeray when he wrote Vanity Fair way back in 1847 about a Regency wannabe poor girl grabbing every opportunity to be simply the best  -  and the richest.

Clare Drewett, the director of the play based on the classic Victorian novel, reckons it was, and gave the opportunist Becky Sharp full Spice Girls backing, as she flounced and flirted her way up and down the Regency society ladder, as it were, on stage at The Minack.

Readers originally had to wade through 19 monthly magazine episodes to discover the fate of Becky, and her fame grew as the irrepressible, pushy optimist's adventures gathered pace.

This production by the Newport Playgoers Society took a lot longer to reach its audience. As a result of Covid, it has been three years in the making, but the wait was worth it, and the strong, upbeat cast and crew clearly loved the experience.

The song Wannabe opened the show, which also featured Little Mix, Bonnie Tyler's, I Need A Hero, and Shake It Off by Taylor Swift, among other girl band recorded hits.

This adaptation of the book by Kate Hamill finds the cast of 20 in the midst of the Napoleonic War and its impact on Becky and her best friend Amelia, perfectly played by the smart and cheeky Liz Keech and the contrastingly demure Emily Smallwood. The  action is narrated by an ever-attentive, beguilingly clad Catherine Morgan, as they tackle the game of chance that is life.

Thackeray had a lot of fun sending-up his characters, especially the socially stuttering Jos, played beautifully by Stuart Fouweather, and the Aunt, an exceptionally expressive Nicola Davies, who was prepared to let some things go, but scorned Becky's behaviour.

The upright Lt Osborne, Steele Quinnell, and fellow soldier, Nick Brimble, were perfectly in step with dear Major Dobbin, Stephen Hopkins, the utterly outrageous Sir Pitt, Steve Drowley, and the naughty Lord Steyne, Graeme Johnson, along with Miss Jemima, Ryan Salter in drag, who shared the stage with a trio of his tiny daughters, Sara, Holly and Sophie.

Retiring Playgoers president David Eynon-Williams was appropriately cast as The King, in his 44th production with the society, which memorably built a replica steam engine and transported it from Gwent to the Minack for its last drama here, The Titfield Thunderbolt.

This time the set, designed by Linda Ward and Graeme Johnson,  presented fewer technical problems, but was eye-catching and effective, along with costume design by Becky Phillips, with sound and lighting by Ellie and Vicky Aston and Sam Bashir.

Welcome back Newport. We missed you.

Girl Power comes to the fore in this rumbustious play on morals based on ever-popular William Makepeace Thackeray novel adapted by Kate Hamill.

Directed by Clare Drewett, who takes the entire production on tour to the Minack Theatre in Cornwall in July after this run, this magnum opus of a production barely draws breath as it romps along at rollicking rate.

The sparsely but effectively set stage is seldom bereft of a host of debauched colourful characters as they traverse the moral maze.

The scandalous story - put simply - is of how the Wheel of Fortune affects two young women, one born to privilege, the other from the streets, and how they cope with the life-cards that they have been dealt.

Becky Sharp (Liz Keech) shines as the money-grabbing, do-anything-to-get-where-you-want-to-be social climber, and Amelia Sedley (Emily Smallwood) quite perfect in the role of the rich girl who falls on hard times.

Seasoned actor and director Drewett cleverly combines vulgar 19th century boisterous gaiety with glitzy 21st century bringing it bang up to date with her use of modern 'Girl Power' music for the seamless scene changes.

Manager (Catherine Morgan), in risqué Cabaret-style attire, starts the whole rowdy ball rolling speaking directly and pointedly to the audience with her opening line "There are no morals here.."

And Catherine, who doubles as auctioneer, maintains her beady eye on proceedings often directing her bile to specific members of the audience, throughout the full two hours of this captivating and hugely enjoyable production.

Make no mistake, this is a triumph of a production in every way. The sheer hard work that has been invested into it by the entire 20-strong cast and crew, is obvious from when the lights go up. Their absolute joy and exuberance at being on stage and doing what they love comes across in waves.

The standard is superb and there are standout performances. Steel Quinnell, as debauched yet tragic soldier George Osborne in his first straight play with Newport Playgoers having previously performed in musicals, is a real find. Keep hold of this talented young man.

What a welcome! Work on this stage presentation began over three years ago, delayed in main by a pandemic beyond Thackeray’s conceivable imagination. This presentation however was worth the wait. Vanity Fair, a tale of love, loss and lust, is nothing short of a triumph, resplendent in colour and vividly exciting performances.

The set design is a visual feast of rolling dice, spinning wheel and card play indicating that the characters are playing the game of their lives. An adaptable, eye-catching triumph for its creators Linda Ward & Graeme Johnson, each prop allows scene changes to move along with no delay.

Liz Keech’s flirtatious and care-free Becky Sharp is undoubtedly a born-survivor as she makes her way to the top of social-society despite opposition from those she encounters. A portrayal as “Sharp” as her character’s name in humour, wit and delivery, Miss Keech maintains her characters strength and resourcefulness, and has no issues making Becky a likable heroine of her generation.

Meanwhile, Becky’s friend, Amelia Sedley portrayed by Emily Smallwood, dallies on the brink of personal happiness as she sells herself into a false security with an idealised love, unaware of a better life waiting in the wings. Amelia could easily be seen as the weaker of the two characters, but Miss Smallwood projects Amelia’s bravery and determination so brilliantly, her personality compliments that of Becky Sharp’s. This gives both leads wonderful characters to captivate the audience with as well as bounce off each other as the narrative drives along.

Catherine Morgan’s enigmatic narrator maintains a wondrous and cheeky presence as the Fair’s Manager & Auctioneer throughout the proceedings. Miss Morgan’s performance frequently breaks the fourth wall, pulling the audience further into the story with intrusive but humorous questions.

Nicola Davies brilliantly characterises the aged Aunt Matilda. Mostly bathchair bound, her protests at the union of her beloved nephew Rawden with Becky are humorously opinionated, much to the audience’s appreciation.

Vanity Fair also has its share of strong male characters. Steele Quinnell brings a “love to hate” quality to gentleman rogue George. While it’s possible to feel much sympathy towards Nick Brimble’s portrayal of “honest villain” Rawdon, caught up between his love of Becky and his own overbearing father and aunt.

The company as a whole work brilliantly within the context of the narrative, parading the stage across several crowd scenes, while simultaneously creating a lively atmosphere. This also includes the appearances of three adorable children who will no doubt be making further appearances with Playgoers in the future!

Vanity Fair is one of Newport Playgoers Society brightest and finest triumphs in recent years and is set to delight outdoor audiences when it plays Minack Festival from 3rd to 7th July 2022. 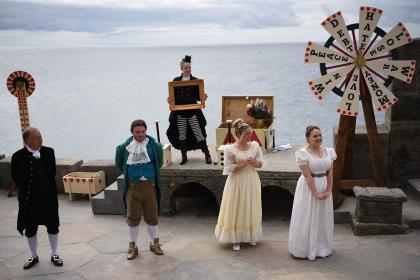 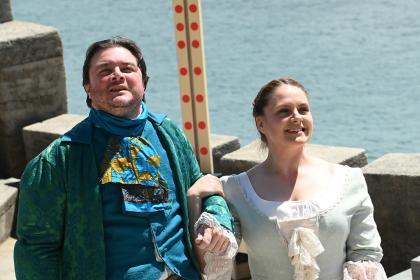 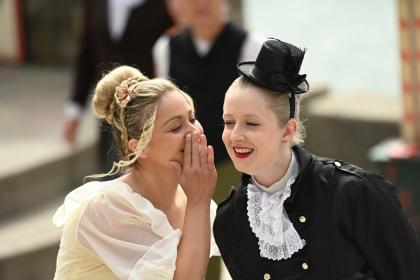 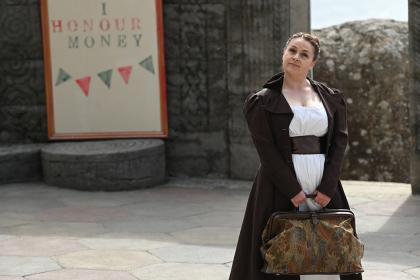 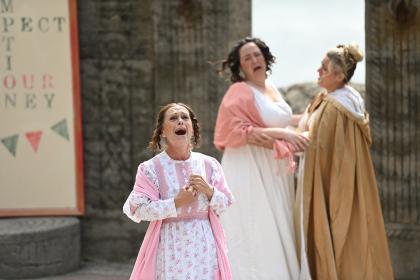 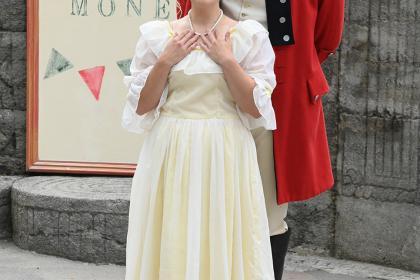 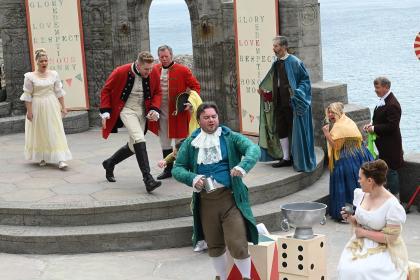 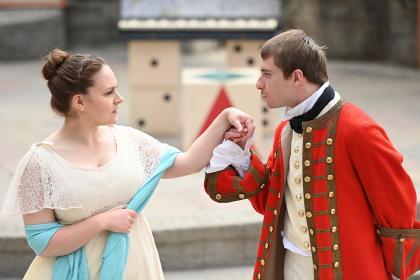 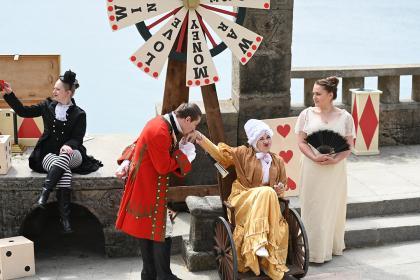 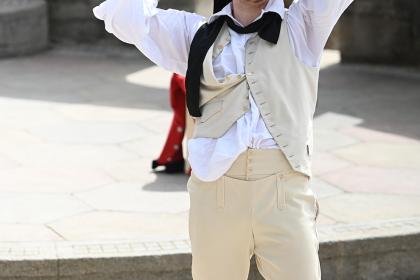 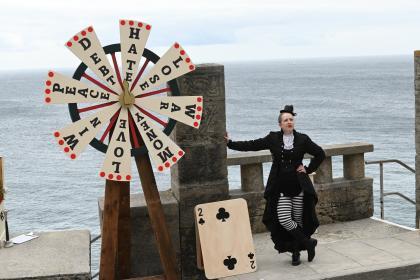 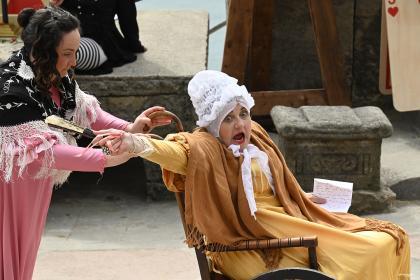 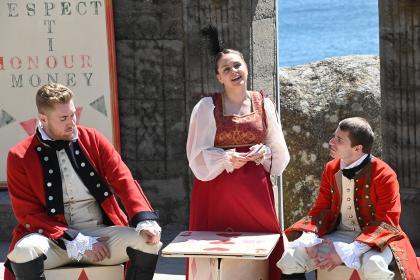 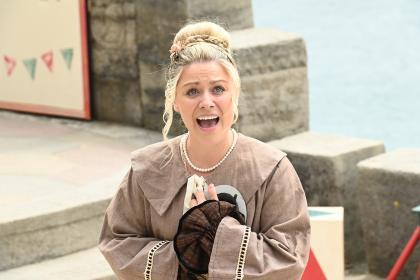 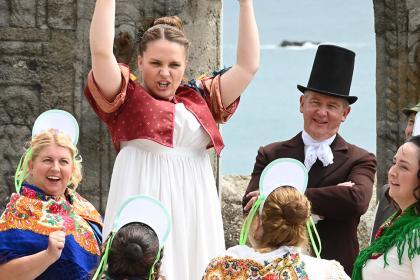 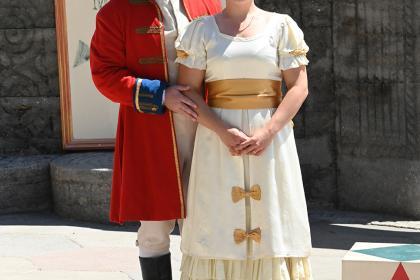